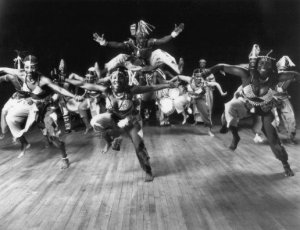 KanKouran was formed in 1983, in Washington, DC, by Artistic Director Assane Konte and former Director of Music, Abdou Kounta, who grew up together in Dakar, Senegal. Kankouran has placed Washington, D.C., on the map through its energized performances and its founding and hosting of the annual West African Dance Conference that is held every fall in Washington, D.C. For over three decades, KanKouran West African Dance Company has been a force in the DC Dance community and across the United States. By providing classes in African dance and drumming to students of all ages, the company shares the history and culture of West Africa. Content and image: KanKouran web. 10 June 2019. < http://kankouran.org/history/>.